It's the End of the World as We Know It, and I Feel Fine

Perl can be a first computer language, but we try to think of it more as a last computer language. Our philosophy, based on how natural language works, says that a future-proof language should be flexible enough to evolve while providing a rich cultural lexicon to discourage gratuitous use of that flexibility. Perl 5 has done okay with that approach over the years, but its design is starting to run into its limits, as have the designs of various other popular languages. Perl 6 is a grand experiment to see if we can transcend the limits of existing languages, to create a new general-purpose, multi-paradigm language that could serve not just as the next flavor-of-the-month language, but as a stable, comfortable mother tongue for new generations of programmers. Come and see how we’re doing on that so far.

Larry Wall was educated at various places including the Cornish School of Music, the Seattle Youth Symphony, Seattle Pacific University, Multnomah School of the Bible, SIL International, U.C. Berkeley, and UCLA. Though trained primarily in music, chemistry, and linguistics, Larry has been working with computers for the last 40 years or so. He is most famous for writing rn, patch, and the Perl programming language, but prefers to think of himself as a cultural hacker whose vocation in life is to bring a bit of joy into the dreary existence of programmers. For various definitions of “work for”, Larry has worked for Seattle Pacific, MusiComedy Northwest, System Development Corporation, Burroughs, Unisys, the NSA, Telos, ConTel, GTE, JPL, NetLabs, Seagate, Tim O’Reilly, the Perl Foundation, Broadcom, and himself. He is currently serving as Artist in Residence for craigslist. 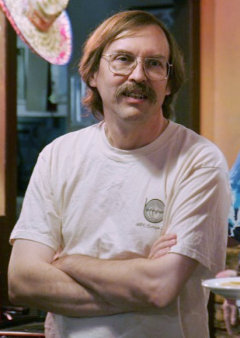