The way how we access information has seen dramatic changes in previous decades starting with the beginning of the Information Age. In particular, in the last two decades, humans have gained nearly unlimited possibilities to access information at any time of the day in every location. With these possibilities, new challenges arise around providing novel interfaces that allow users to access information without overwhelming the user while also not disconnecting them from their surroundings. A lot of widely-used interfaces create a major disconnect between users and their environment, with a popular example being mobile phone users that walk along busy streets without noticing their surroundings.

eXtended Reality has the potential to overcome this disconnection between information and the actual physical environment around the user and has the potential to create interactive spaces surrounding the user. In particular, the ability of eXtended Reality as being an immersive technology that allows extending the reality by integrating information into the field of view of users. While plenty of applications have been demonstrated for small scale environments such as office environments or indoor spaces, large dynamic spaces still pose major challenges. However, these environments have a huge potential with a large variety of applications in large-scale environments such as urban street scenes, construction sites and large event sites. In this talk, we will explore the challenges around dynamic large-scale environments in particular with regard to content registration and visualization and will discuss industrial applications in the context of architecture, construction and engineering but also for sports spectating.

Stefanie Zollmann is an Associate Professor for Computer Science at the University of Otago in New Zealand. She is leading the Visual Computing Otago research group. Before starting at Otago in 2016, she worked as a senior developer at Animation Research Ltd on eXtended Reality visualization, Computer Graphics and Computer-Vision-based tracking technology for sports broadcasting. She also worked for Daimler and Graz University of Technology. Her main research is in the field of Visual Computing, which describes the combination of traditional Computer Graphics, Computer Vision, Machine Learning, Visualization and Human-Computer-Interaction. Her research focus is on eXtended Reality (XR) for sports and media, visualization techniques for Augmented Reality and novel methods for capturing content for immersive experiences. Stefanie serves on the Editorial Boards of Transaction on Visualization and Graphics (TVCG) and Computers & Graphics and was Science and Technology program chair for ISMAR 2019 and 2020. 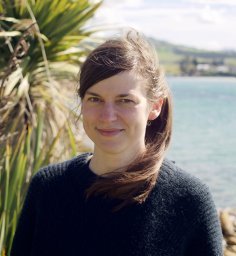