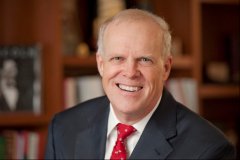 John L. Hennessy is the James F. and Mary Lynn Gibbons Professor of Computer Science and Electrical Engineering in the Stanford School of Engineering, and the Shriram Family Director of Stanford’s Knight-Hennessy Scholars, the largest fully endowed graduate-level scholarship program in the world. He is chairman of Alphabet and serves as a trustee of the Gordon and Betty Moore Foundation. Formerly the tenth president of Stanford, he is also a computer scientist who co-founded MIPS Computer Systems and Atheros Communications. John is the coauthor (with David Patterson) of two internationally used textbooks in computer architecture. His honors include the 2012 Medal of Honor of the Institute of Electrical and Electronics Engineers and the 2017 ACM A.M. Turing Award (jointly with David Patterson). John earned his bachelor’s degree in electrical engineering from Villanova University and his master’s and doctoral degrees in computer science from the Stony Brook University.