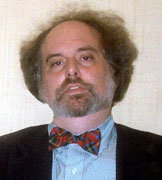 Emerson is co-inventor and co-developer of model checking , an algorithmic method of verifying nominally finite-state concurrent programs. The method was proposed in this paper [CE81]. authored with Ed Clarke in 1981, a paper widely recognized as seminal for founding today’s broad field of model checking and establishing its basic principles. These ongoing finite state programs correspond to the synchronization skeletons of many concurrent, distributed, or reactive programs comprised of multiple processes that must synchronize or coordinate their behavior. Correct behavior is described using a temporal logic, such as CTL (Computation Tree Logic) permitting specification of behavior along all futures versus some futures. In the past quarter century model checking has become a very popular and successful approach to formal verification. His other contributions include new and improved model checking algorithms, abstractions and reductions to simplify the complexity of model checking, decision procedures, and algorithmic methods of program synthesis. Additional interests include model checking symmetric and nearly symmetric systems, verification of parameterized systems, and reasoning about data structures. Emerson is a recipient of the ACM Turing Award, as well as the ACM Kanellakis Prize, the CMU Newell Medal, and the IEEE LI.CS’06 Test-of-Time Award. He serves on the editorial boards of leading formal methods journals as well as conference program committees. He is an Information Sciences Institute Highly Cited Researcher. He received his B.S. degree from the University of Texas at Austin in Mathematics and a Ph.D. in Applied Mathematics from Harvard University.