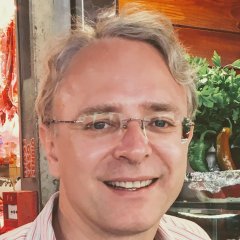 Bio: Fergus Henderson has been a software engineer at Google since 2006. He started programming as a kid in 1979, and went on to academic research in programming language design and implementation. With his PhD supervisor, he co-founded a research group at the University of Melbourne that developed the programming language Mercury. He has been a program committee member for eight international conferences, and has released over 500,000 lines of open-source code. He was a former moderator of the Usenet newsgroup comp.std.c++ and was an officially accredited “Technical Expert” to the ISO C and C++ committees. He has over 15 years of commercial software industry experience. At Google, he was one of the original developers of Blaze, a build tool now used across Google, and worked on the server-side software behind speech recognition and voice actions (before Siri!) and speech synthesis. He managed Google’s text-to-speech engineering team, helped to launch WaveNet and the Google Cloud TTS API, and is currently the most senior engineer in the TTS research team. Software that he has written is installed on over a billion devices, and gets used over a billion times per day.