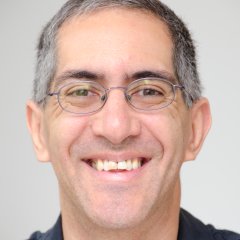 Dan Garcia (UC Berkeley MS 1995, PhD 2000) is a Teaching Professor in the Electrical Engineering and Computer Science department at UC Berkeley. Selected as an ACM Distinguished Educator in 2012 and ACM Distinguished Speaker in 2019, he has won all four of the department’s computer science teaching awards, and holds the record for the highest teaching effectiveness ratings in the history of several of the department’s courses.

He is a national leader in the “CSforALL” and “A’s for All (as time and interest allow)” movements, bringing engaging computer science to students normally underrepresented in the field, and supporting them to achieve proficiency. Thanks to four National Science Foundation grants, the “Beauty and Joy of Computing (BJC)” non-majors course he co-developed has been shared with over 1,000 high school teachers! He is delighted to regularly have more than 50% female enrollment in BJC, with a high mark of 63% in the Spring of 2018, shattering the record at UC Berkeley for an intro computing course, and is among the highest in the nation! He is humbled by the national exposure he and the course have received in the New York Times, PBS NewsHour, NPR’s All Things Considered, USA Today, and the front pages of the San Jose Mercury News and San Francisco Chronicle.

He has won the NCWIT Undergraduate Research Mentoring award, the UC Berkeley Unsung Hero award, the LPFI Lux award, the SAP Visionary Member award, and was chosen as a Google CS4HS Ambassador for his work to support teachers and diversify computing. He has served on the CRA-WP Board, ACM Education Board, the College Board Computer Science Principles Development Committee, was the ACM SIGCSE Program co-chair in 2017, and the ACM SIGCSE Symposium co-chair in 2018. He was voted ACM SIGCSE Vice-Chair from 2019-2022, and Secretary from 2022-2025. In 2019 it was announced he was the most frequent SIGCSE author in their 50-year history, with 61 submissions of all kinds: papers, panels, workshops, posters, etc.; second place had 42.

His computer science education research and development (R&D) interests are squarely centered on advancing equity through assessment transformations. He is a vocal evangelist for the “A’s for All (as time and interest allow)” initiative that provides students with the time they need to achieve proficiency through soft deadlines, multiple-chance exams, and pre-approved incomplete grades. His GamesCrafters undergraduate computational game theory R&D group builds tools to solve and analyze abstract strategy games. He has advised 25 MS students and over a thousand undergraduates since forming his varied Research, Art, and Development (RAD) groups in 2001.

On the fun side, he can play 20+ songs on the harmonica (but they all end up sounding like “Piano Man”), juggle 5 balls, score in the low 90s on the links, spin things on his finger, and recite all the words to many old-school raps, stand-up comedy bits and Monty Python sketches. He also has a collection of several hundred game and puzzle books, and terribly enjoys sharing good brain teasers or playing any one of his many exotic board games with students who drop by during open office hours. Don’t get him started telling jokes…