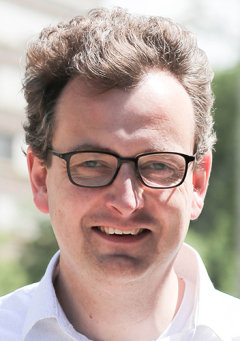 Koen Hindriks (1971) holds a PhD degree from Utrecht University and a MSc degree from the University of Groningen in Computing Science. He spent part of his PhD candidature at the University of Toronto. He is an Associate Professor at the Delft University of Technology in the Department of Electrical Engineering, Mathematics and Computer Science within the Interactive Intelligence section. He is a member of the Board of the Benelux Association for Artificial Intelligence, of the International Society of Applied Intelligence, and of the Delft Robotics Institute. He has published more than 100 papers on agent technology and organized various events in this area, including the 2012 Dagstuhl Seminar on Engineering Multi-Agent Systems, the AAMAS-2013 and AAMAS-2012 Workshop on Cognitive Agents for Virtual Environments, and the AAMAS-2013 and AAMAS-2012 Workshop on Autonomous Robots and Multirobot Systems. He has also given many tutorials in this area at, for example, the European Agents Systems Summer School 2013, 2012, 2009, AAMAS 2009 and 2008, the PRIMA 2009 Agent School, and the Dutch Research School for Information and Knowledge Systems.

His research focuses on the analysis, modeling, and development of agent technology that integrates different aspects of intelligence such as reasoning, decision-making, planning, learning and interaction but also integrates aspects such as emotional intelligence. This multi-agent technology has been applied, among others, in micro-simulation of domains such as traffic, logistics and supply chain management, serious gaming, negotiation, socio-cognitive robotics, and user modeling. He has designed and developed the agent programming languages 3APL and GOAL and worked on the verification and specification of agent programs.