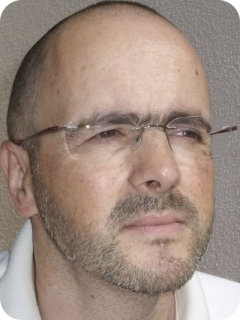 Paulo Ferreira holds a PhD from the Université Pierre et Marie Curie (1996) in Computer Science. His MSc (1992) and BSc (1988) are both from Instituto Superior Técnico (University of Lisbon) in Electrotechnical Engineering. He holds the “agregação” since November 2009 from the same University.

He is currently Associated Professor with “Agregação” in Instituto Superior Técnico at the Department of Computer Science and Engineering where he has been teaching courses within the scientific area of Architecture and Operating Systems, at both undergraduate and graduate levels, including Mobile Computing, Middleware for Distributed Internet Applications, Operating Systems, and Advanced Distributed Systems.

He was Pro-Rector at the Technical University of Lisbon (UTL) between 2007 and 2010, being responsible for the analysis and evaluation of existing information and communication systems. In this activity, among other tasks, he has coordinated the VoIP project, improved the computer system of the academic services as well as the infrastructure of communications between the various schools of UTL. He is also member of the Directory Board of Óbidos Technological Park representing UTL.

He was responsible for the Distributed Systems Group (“Grupo de Sistemas Distribuídos”, GSD) of INESC ID since January 1999 to 2010 (sharing this responsibility every two years since 2010 on a rotative basis). This group is currently composed of nine PhDs and several PhD and MSc students. In addition to the responsibility for scientific coordination of GSD, he has also been responsible for the Research Action Line at INESC ID called Computing Systems and Communication Networks in 2012-2013 and 2008-2009.

He is senior member of INESC ID in the Distributed Systems Group, where he develops his research work in the scientific research area of ​​distributed systems, with emphasis on middleware, mobile computing and operating systems. He has published, as author or co-author, more than 100 articles in international journals and conferences, 1 scientific book, 11 book chapters, a pedagogical book (with 3 editions, being one in Brazil), serves on various program committees (e.g. Middleware, ICDCS, DAIS, etc.), served as an expert to the European Union for assessment of projects proposals under the 7th Framework Program, led more than 15 research projects, was one of the founders and board officer of EuroSys (ACM - European Chapter of the Special Interest Group on Operating Systems) being currently member of the Steering Committee; he is also a member of the Steering Committee of the ACM/IFIP/Usenix Middleware (2013-2014) and ACM/IFIP/Usenix Adaptive and Reflective Middleware (ARM). He is currently member of the editorial board of the Springer Journal of Internet Services and Applications.

He is senior member of ACM and IEEE, was awarded two Best Paper Awards at international events (ACM/IFIP/Usenix Middleware Conference, level A in both CORE and RADIST rankings), 1 Recognition of Service Award from ACM, his PhD thesis was top ranked at the Université Pierre et Marie Curie, and in the academic years of 2010/2011 (2nd semester) and 2013/14 (1st semester) he was awarded the mention of “excellent teaching” at IST in the courses of Mobile Computing (MSc, 1st year) and Operating Systems (BSc, 2nd year), respectively.