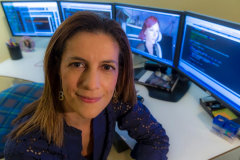 Cristina (Crista) Lopes is a Professor of Informatics in the School of Information and Computer Sciences at the University of California, Irvine, and Director of the Institute for Software Research at UC Irvine. Her research focuses on software engineering and programming languages for large-scale data and systems. Early in her career, she was a founding member of the team at Xerox PARC that developed Aspect-Oriented Programming. Along with her research program, she is also a prolific software developer. Her open source contributions include being one of the core developers of OpenSimulator, a virtual world server. She is also a founder and consultant of Encitra, a company specializing in online virtual reality for early-stage sustainable urban redevelopment projects. Her book “Exercises in Programming Style” has gained rave reviews, including being chosen as “Notable Book” by the ACM Best of Computing reviews. She has a PhD from Northeastern University, and MS and BS degrees from Instituto Superior Tecnico in Portugal. She is the recipient of several awards, including a prestigious CAREER Award and a Pizzigati Prize for Software in the Public Interest.