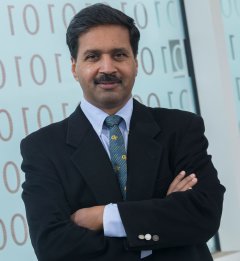 Bio: Vivek Sarkar is Chair of the School of Computer Science and the Stephen Fleming Chair for Telecommunications in the College of Computing at Georgia Institute of Technology. He conducts research in multiple aspects of programmability and productivity in parallel computing, including programming languages, compilers, runtime systems, and debuggers for parallel, heterogeneous, and high-performance computer systems.

Sarkar started his career in IBM Research after obtaining his Ph.D. from Stanford University, supervised by John Hennessy. His research projects at IBM include the PTRAN automatic parallelization system led by Fran Allen, the ASTI optimizer for IBM’s XL Fortran product compilers, the open-source Jikes Research Virtual Machine for the Java language, and the X10 programming language developed in the DARPA HPCS program. He was a member of the IBM Academy of Technology during 1995-2007. After moving to academia, Sarkar has mentored over 30 Ph.D. students and postdoctoral researchers in the Habanero Extreme Scale Software Research Laboratory, first at Rice University since 2007, and now at Georgia Tech since 2017. Researchers in his lab have developed the Habanero-C/C++ and Habanero-Java programming systems for parallel, heterogeneous, and distributed platforms. While at Rice, Sarkar was the E.D. Butcher Chair in Engineering, served as Chair of the Department of Computer Science, created a new sophomore-level course on the fundamentals of parallel programming, as well as a three-course Coursera specialization on parallel, concurrent, and distributed programming.

Sarkar is an ACM Fellow and an IEEE Fellow. He has been serving as a member of the US Department of Energy’s Advanced Scientific Computing Advisory Committee (ASCAC) since 2009, and on CRA’s Board of Directors since 2015. He is also the recipient of the 2020 ACM-IEEE CS Ken Kennedy Award.