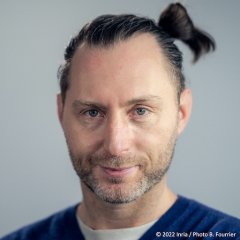 Simon Bliudze is a Research Scientist at INRIA Lille – Nord Europe (France) and a part-time Assistant Professor at the Computer Science department of École polytechnique (Paris, France). He holds an MSc in Mathematics from St. Petersburg State University (Russia, 1998), an MSc in Computer Science from Université Paris 6 (France, 2001) and a PhD in Computer Science from École Polytechnique (France, 2006). He has spent two years at Verimag (Grenoble, France) as a post-doc with Joseph Sifakis working on formal semantics for the BIP component framework. Before joining INRIA in 2017, he has spent three years as a research engineer at CEA Saclay (France) and six years as a scientific collaborator at EPFL (Lausanne, Switzerland).