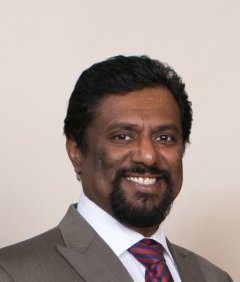 Saman P. Amarasinghe is a Professor in the Department of Electrical Engineering and Computer Science at Massachusetts Institute of Technology and a member of its Computer Science and Artificial Intelligence Laboratory (CSAIL) where he leads the Commit compiler group. Under Saman’s guidance, the Commit group developed the StreamIt, StreamJIT, PetaBricks, Halide, Simit, MILK, Cimple, TACO, GraphIt, Tiramisu, BioStream, Seq and Cola programming languages and compilers, DynamoRIO and BuildIt dynamic instrumentation systems, Superword Level Parallelism (SLP), goSLP and VeGen for vectorization, Program Shepherding to protect programs against external attacks, the OpenTuner extendable autotuner, and the Kendo deterministic execution system. He was the co-leader of the Raw architecture project. Saman was the founder of Determina Corporation, and a co-founder of Lanka Internet Services Ltd., and Venti Technologies Corporation. Saman received his BS in Electrical Engineering and Computer Science from Cornell University in 1988, and his MSEE and Ph.D. from Stanford University in 1990 and 1997, respectively. He is an ACM Fellow.