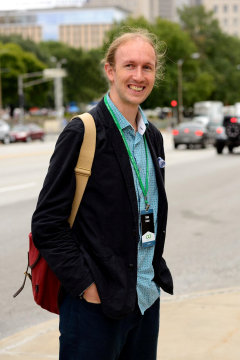 Tomas is an Assistant Professor at Charles University in Prague. He is interested in understanding the nature of programming and finding new and better ways of doing it. He uses various methods ranging from theoretical programming langauge research, applied work resulting in open-source software, as well as interdisciplinary approaches that look at programming through the perspectives of history and philosophy. He believes that the most interesting developments in programming happen when a new way of thinking makes difficult problems disappear.

In recent years, he also worked on functional programming and contributed to the development of the F# language and type providers at Microsoft Research. His PhD from University of Cambridge was on coeffects, a theory of context-aware programming languages. At University of Kent and The Alan Turing Institute, he spent most of his time working on programming tools for data science.