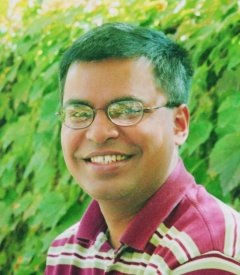 Dr. Sudipto Ghosh is a Professor of Computer Science at Colorado State University. He received the Ph.D. degree in Computer Science from Purdue University in 2000. His research interests are in the areas of modeling and testing software. Specific topics include data warehouse testing, fault localization, model-based software development, mutation testing and higher order mutation, and regression test selection. Dr. Ghosh is on the editorial boards of IEEE Transactions on Reliability, Software Quality Journal, and Information and Software Technology. He was a general co-chair of the ACM/IEEE 12th International Conference on Model Driven Engineering Languages and Systems held in Denver in 2009, and the 16th Modularity Conference in Fort Collins in 2015. He was a program co-chair of the Third International Conference on Software Testing, Verification and Validation held in Paris in 2010, the Fourth International Conference on Dependable Systems and their Applications in Beijing in 2017, and the 29th IEEE International Symposium on Software Reliability Engineering in Memphis in 2018. He is a member of the ACM and a Senior Member of the IEEE.