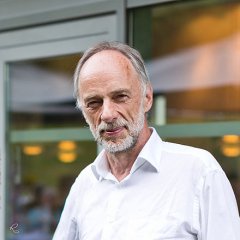 Wilhelm’s research focuses on programming languages, compiler construction, static program analysis and embedded real time systems, but also includes animation and visualization of algorithms and data structures. Wilhelm discovered connections between code selection and the theory of regular tree automata, which is relevant for code generation using tree automata. He is one of the co-developers of the MUG1, MUG2 and OPTRAN compiler generators, which are based on attribute grammars. Together with Ulrich Möncke, he proposed grammar flow analysis as a generalization of interprocedural data flow analysis. He invented a popular shape analysis based on three-valued logic together with Mooly Sagiv and Tom Reps. Wilhelm became a fellow of the ACM in 2000 for his research on compiler construction and program analysis and his work as a scientific director of the LZI. The TU Darmstadt and the Fraunhofer-Institut für Graphische Datenverarbeitung awarded him with the Alwin-Walther medal in 2006. In 2007 the French Ministry of Education and Research awarded him with the Gay-Lussac-Humboldt prize for his contributions to science and his achievements in German–French cooperation in research and education. He became a member of the European academy of sciences (Academia Europaea) in 2008. In 2009, he was awarded the Konrad Zuse Medal for his achievements in research and education with respect to compiler construction, real time analysis of programs and his service as scientific director of the LZI/Schloss Dagstuhl. In 2010 he was awarded the Cross of the Order of Merit of the Federal Republic of Germany and the ACM Distinguished Service Award.