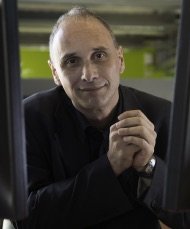 Professor Vladimiro Sassone has worked at the University of Southampton since 2006, where he is the Roke/Royal Academy of Engineering Research Chair in Cyber Security, the Head of the Cyber Security Group, the Director of the GCHQ/EPSRC Academic Centre of Excellence for Cyber Security Research (ACE-CSR), the Director of the Cyber Security Academy (CSA), a partnership between the University, Industry and Government to advance Cyber Security through excellence in research and teaching, industrial expertise and training capacity.
A theoretical computer scientist by formation, Professor Sassone turned to cyber security in 2001. His recent research include resource access control over untrusted networks, trust management systems, predictive trust-and-reputation models, anonymity and privacy in the presence of trust and attackers’ belief systems. He originated the notions of trust structures and the information-theoretic measure of vulnerability with beliefs. He was the first to use hidden Markov models in trust-and-reputation systems, and the first to use game theory to design, understand and analyse collaboration mechanisms in anonymity networks like Tor. His externally funded research currently focusses on cloud security, data anonymisation, cyber security controls and the security of the internet-of-things and of smart contracts on distributed ledgers technologies. Professor Sassone has been the Head of Department of Informatics at the University of Sussex, Director of the ECS Graduate School at Southampton, and has been leading on cyber security in Southampton since 2012. He has chaired for seven years the ETAPS Steering Committee. He is President of the European Association for Theory and Practice, and has been elected member of the Academia Europaea, and of the Council of the European Association for Theoretical Computer Science continuously since 2003. He was among the founders of the symposium ‘Trustworthy Global Computing,’ the BCS conference ‘Visions of Computing,’ the ETAPS conference ‘Principles of Security and Trust,’ and the ‘Southampton CyberCrime Symposium.’ He collaborates with and consults for branches of Government and regulatory bodies, including the Foreign and Commonwealth Office, The Cabinet Office, GCHQ/CESG, NCA, ROCUs, Hampshire Police, FCA and Bank of England. He is the UK representative on the IFIP Technical Committee TC1, Foundations of Computer Science. Professor Sassone is the editor-in-chief of ACM Selected Readings and of Springer’s ARCoSS, Advanced Research in Computing and Software Science. He is editor of Theoretical Computer Science, Logical Methods in Computer Science, Electronic Proc. in Theoretical Computer Science and, until recently, of The Computer Journal.