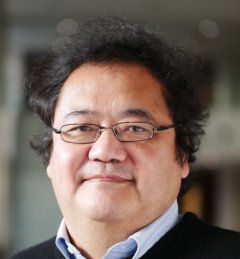 Toshiyuki Masui is a Professor of Faculty of Environment and Information Studies, Keio University, Japan. Before joining Keio University, he worked at many IT companies and laboratories, including Fujitsu, Sharp, Sony, AIST, and Apple. For many years, he has been working on improving the user interface of computers, mobile phones, and information appliances in the coming age. In 2001, he developed a predictive Japanese text input system, “POBox,” for Sony’s mobile phones, and the technology is now the standard input method on almost all the Japanese mobile phones. In 2006, he got headhunted by Apple for the development of iPhone’s Japanese text input system, and his ‘flick-based’ Japanese text input method is now the standard for almost all Japanese smartphones.

He is the inventor of the “Gyazo” image capturing service, the “Scrapbox” information management system, and the “Helpfeel” help management system provided by Nota Inc., Japan, where he serves as the CTO. Around 10M users are using Gyazo worldwide, and Nota acquired $2M from Japanese VCs for the service in 2014.