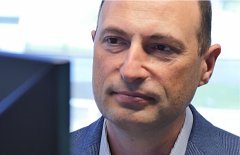 Alexander Egyed is a Full Professor and Chair for Software-Intensive Systems at the Johannes Kepler University, Austria (JKU). He received a Doctorate degree from the University of Southern California, USA in 2000 and then worked for industry for many years before joining the University College London, UK in 2007 and JKU in 2008. At JKU, he built up a research institute which has a staff of over 30 people today. He is most recognized for his work on software and systems design – particularly on variability, consistency, and traceability. Dr. Egyed has published over 200 refereed scientific books, journals, and conferences with over 7000 citations to date. He was recognized a Top 1% scholar in software engineering in Communications of the ACM, Springer Scientometrics, and Microsoft Academic Search. He was also named an IBM Research Faculty Fellow in recognition to his contributions to consistency checking, received a Recognition of Service Award from the ACM, Best Paper Awards from COMPSAC and WICSA, and an Outstanding Achievement Award from the USC. Dr. Egyed served as program chair/steering committee member (ASE, FASE, MoDELS,…) and as editorial board member (TSE, SoSyM,…). He is a member of the IEEE, IEEE Computer Society, ACM, and ACM SigSoft.