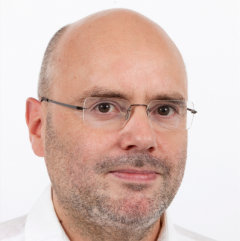 Since August 2021 Professor Armin Biere is leading the Chair of Computer Architecture at the Albert-Ludwigs-University Freiburg in Germany after 17 years as head of the Institute for Formal Models and Verification at the Johannes Kepler University in Linz, Austria.

His primary research interests are applied formal methods, more specifically formal verification of hardware and software, using model checking and related techniques with the focus on developing efficient SAT and SMT solvers. He is the author and co-author of more than 220 papers and served on the program committee of more than 160 international conferences and workshops. His most influential work is his contribution to Bounded Model Checking. Decision procedures for SAT, QBF and SMT, developed by him or under his guidance rank at the top many international competitions and were awarded 96 medals including 55 gold medals. He is a recipient of an IBM faculty award in 2012, received the TACAS most influential paper in the first 20 years of TACAS in 2014 award, the HVC'15 award on the most influential work in the last five years in formal verification, simulation, and testing, the ETAPS 2017 Test of Time Award, the CAV Award in 2018, and the IJCAI-JAIR 2019 Award.

Besides organizing several workshops Armin Biere was co-chair of SAT'06, and FMCAD'09, was PC co-chair of HVC'12, co-chair of CAV'14, acted as co-chair of TACAS'20. He served on the editorial boards of the Journal of Automated Reasoning (JAR) (2011 to 2021) and the journal for Formal Methods in System Design (FMSD) (2012 - 2021). Since 2019 he is an Associate Editor of the Journal of Artificial Intelligence Research (JAIR) continues to serve on the editorial board of Journal on Satisfiability, Boolean Modeling and Computation (JSAT) since its inception in 2004.

He is an editor of the Handbook of Satisfiability, for the first edition in 2009 and the second edition in 2021, and initiated and organizes the Hardware Model Checking Competition (HWMCC). From 2011-2017 he served as (first) chair and from 2017 to 2020 as vice-chair, now as counselor to the board of the SAT Association. Since 2012 he is a member of the steering committee of FMCAD. In 2006 Armin Biere co-founded NextOp Software Inc. which was acquired by Atrenta Inc. in 2012.