This paper presents the design of a simple context-oriented programming extension to Emfrp, a purely functional reactive programming language for resource-constrained embedded systems. Emfrp provides the ability to describe various sorts of embedded systems in clean and straightforward ways. However, because of the static nature of the language, it does not have suitable capabilities to modularize adaptive behaviors. The proposed extension provides a simple layer mechanism with explicitly specified activation conditions. Also, a feature to describe events along with the layer activation is introduced. As a result, the extension can eliminate various cross-cutting code that often appear in plain Emfrp programs.

Takuo Watanabe is Professor in the Department of Computer Science at Tokyo Institute of Technology. He received his Ph. D. from the Department of Information Science at the Tokyo Institute of Technology in 1991. He is working in the area of programming languages, programming methodologies, and formal methods. His research focuses on understanding the nature of reflective behaviors in concurrent systems, inventing new applications of computational reflection, and developing new abstraction mechanisms and programming models for safe/secure systems. 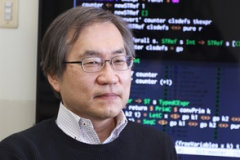