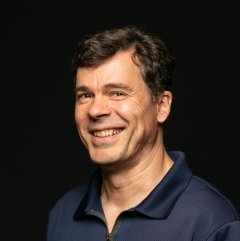 Konstantin Läufer is a professor of computer science at Loyola University Chicago. He earned a PhD in computer science from the Courant Institute at New York University in 1992. His research interests include programming languages, software architecture, and distributed and pervasive computing, with applications in bioinformatics, environmental science, and digital humanities. Konstantin’s research has been funded by government agencies and corporations, and he is a co-inventor on two Lucent Technologies patents.